Wow – what a Christmas!  It has been a busy few days, with a few hiccups along the way – but so much fun.

Christmas Eve
On Christmas Eve we went to Church – the children’s service – Alex sadly only lasted about 5 minutes.  Then he wanted to wander.  Other kids were wandering too – but our little man loved the way his voice echoed in the big church… so not so cute.
After church we went to Matt’s parents for dinner and presents with all his brothers and their family.  There was also the annual visit from Santa – Alex was in awe – he couldn’t even make out his little “ho ho ho” that he says when we show him Santa. 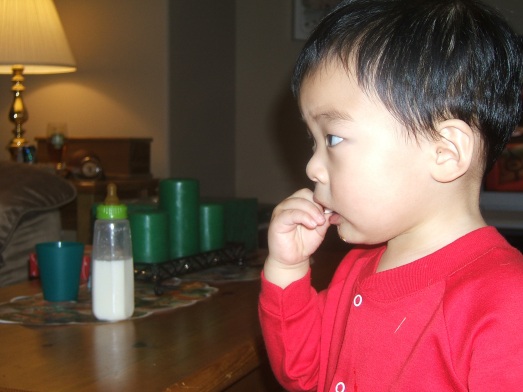 Helping out the reindeer...

Christmas Day
What a blur!  Alex was up just after 7, so I got up with him, he had a bottle and I made coffee and by Matt got up shortly after.  We then brought Alex up to the tree… Oh the awe in his eyes!  Now I know what people say about how Christmas is so much better with little children around.

We opened presents and played with the toys for a while and then we had to get ready for my Mom and my brother and his kids who were coming over for brunch. 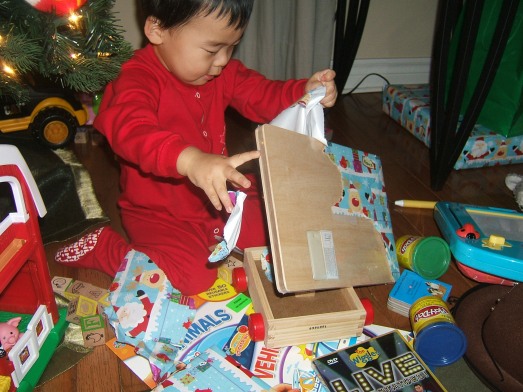 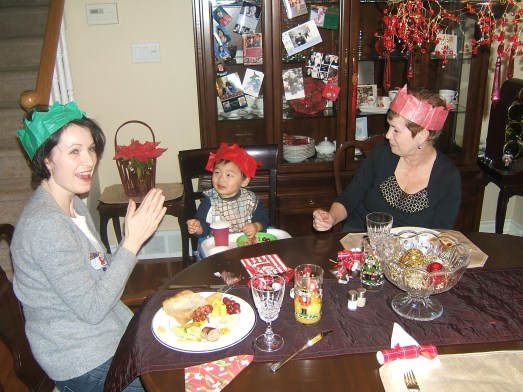 After they left and Alex had his nap, we got ready for another Christmas do at Matt’s grandmother’s place.

It was a good time… until…

Boxing Day
I woke up at 2:30am and got sick… then Alex woke at 3 crying  and I couldn’t calm him down until I laid on the floor with him.  But then I would feel like I was going to throw up again, so I’d put him in his crib, and he’d cry and the cycle would continue.  I finally had Matt go in at 4:30.  By 5:30 Alex was in our bed for about an hour (and he slept!), then he and I were up for the day.  So I had about 3 hours of sleep.  And Alex was quite grouchy.  I think it was the disruption in his routine – and perhaps the lack of a proper meal – he wouldn’t sit to eat with all the people around!  So we ended up missing my Grandma’s Christmas that day.  I felt horrid all day and got sick again around 7:30.  After that though I slept for 12 hours and was a lot better.

All in all it was a holiday to remember – our first with our little man.  Alex really is the ultimate gift – I could not ask for anything else!