On Saturday we travelled to Grimsby to meet up with the three other families that we have gotten to know who have adopted from South Korea.   We went to Barbara and Andy’s place, they are the parents of Daniel, and also there were Belinda and Steve, parents of Adam and the brand new baby Benjamin, and Karen and Kevin, parents of Lucas.  The four of us all brought home our boys within 4 months of one another.  We had a lot of fun – as always!  It is so cool being able to see the boys grow. The first time they were just all trying to walk.  The second time they were walking, but not quite talking or running.  Now they are all over the place!  There are so many similarities between the boys.  All of the boys are on the verge of talking – but still lots of grunting and pointing going on.  They all throw their food (which made me feel a lot better!).  And the parents are just worn right out (in a very good way).  It was also really exciting to meet Benjamin – the newest addition to Belinda and Steve’s family.  Ben arrived just 3 weeks ago and I was lucky enough to hold him for a little while.  He is so small!

I unfortunately forgot my camera (and Alex’s shoes) in the rush out the door – but I “borrowed” some pics from the other parents.  Enjoy! 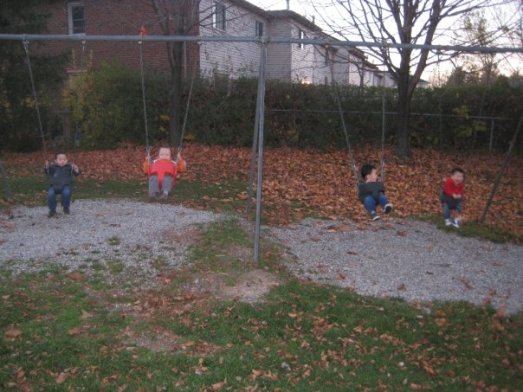 And… Alex slept in until 9am the next morning!! Woo Hoo!!  Guess the boys wore him out!  (either that or he was tired from being up from 12 – 2am on hours Friday night)…