The past week was a blur.

I just seem to work, play, crash, repeat.  I love – but it just leaves little time for one of the things I enjoy – blogging.  But I have a few minutes now so here’s what’s been going on.  Matt went away with some of the men in the neighbourhood – up to his family cottage for a fishing adventure.  Well – they didn’t catch many fish – but I hear that they had lots of fun.  So that left Alex and I for a mommy and son bonding weekend.  I had such great plans – mainly a pumpkin patch adventure!  However, it rained, and rained, and rained some more – so no outdoor adventures for us.

Instead, one of my neighbours, whose hubby was up north with Matt, and I took our boys to Kidzone in Waterloo.  I had gone a few months ago when Alex was still pretty little and could hardly walk – so this was a whole new adventure.  Alex seemed to enjoy himself – but I think at times he was overwhelmed by all the action.  He just loved watching everyone else – and who could blame him – it was really busy.  He was much more mobile this time around – running, crawling, climbing – but of course because of his age, I had to be with him at all times (not that I would ever let him out of my sight).  But I paid for it later!  Crawling through those tubes, lifting, climbing… argh.  I was in pain that night!  But it was worth it knowing Alex was having fun. 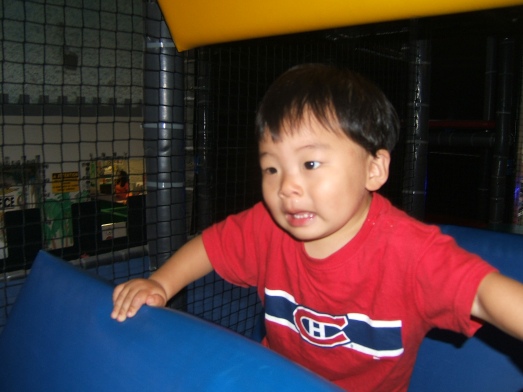 That night I had a few of the girls whose hubbies were north with Matt over for a movie, munchies, and drinks – we had a great time. We watched Ghosts of Girlfriends Past and chatted until way too late.  Alex decided to wake up at 6am…….. not cool.  So only 4 hours of sleep for me.  I felt horrible all Sunday and even napped when he did – but it was only 1.5 hours, I needed more like 3.  So Sunday was rough – but we survived!

Over the weekend I even had a few crafty moments!  I worked on a cell phone case for the upcoming Christmas craft show I’m participating in this November.  I think it turned out really well – now I just need to make 10 more.

Today was momentous too – we had our first day with our cleaning lady!  Yes ladies, a cleaning lady.  How did I survive so long without one?  The house looks great – and it will just keep getting better! To celebrate we went out for dinner (didn’t want to mess up the clean kitchen!) – which turned out to be a big mistake. Alex didn’t nap much today at the sitters, and he just threw his food everywhere.  Not cool – especially since we were at a restaurant, not somewhere like McD’s.  Oh well – it’s all about experiences right?

Tomorrow we go to the lawyers to sign the final adoption papers (yeah!) and have them notarized. They then get sent to our local courts to get approved – Finally!