On Saturday we went to “Downtown Seoul”.  We got our T Metro cards and ventured onto the subway.  The subway here is very easy to use, lots of English, and it is safe and clean.  We first went to Changdeokgun Place.  This was the palace used by many Joseon kings since 1104.  We needed to take a guided tour and it was worth it!  It was a beautiful place. 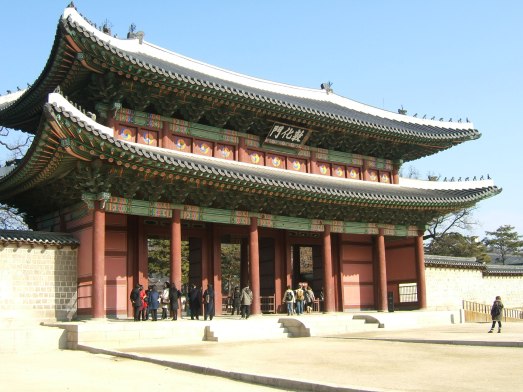 Leave it to me to find a library!

After we left the palace, we went to Insadong Market!  We loved it!  There were hundreds of little shops selling traditional souvenirs and lots of Korean pottery.  We bought a few goodies, and even got Alex’s name put on a stamp featuring the year of the rat symbol.  When the lady who was making it discovered that we were adopting she kept thanking us and gave us a discount.

We then ventured out of the market to get some lunch (traditional Subway… ) and to go to City Hall to catch a City Bus Tour.  What a mess that was.  We got really lost due to a major demonstration and police presence that was going on.  I’m talking at least a thousand police officers and tonnes of police buses.  Turns out there is a number of areas that are marked for redevelopment and tenants are demanding better compensation.  Last week during another protest 5 people died when the police intervened and there is a warrant out for the tenants leader.  So we got really turned around, but in the end we found the bus tour and toured around Seoul to get a grasp of what the city is made up of.  We got off and walked up to Seoul Tower and looked over the city at dusk – what a beautiful (and huge) place – including the suburbs there are over 23 million people!  Second largest in the world!

Eventually we got back and went once again to Yeoksam Station and had some Vietnamese Soup – yummy!